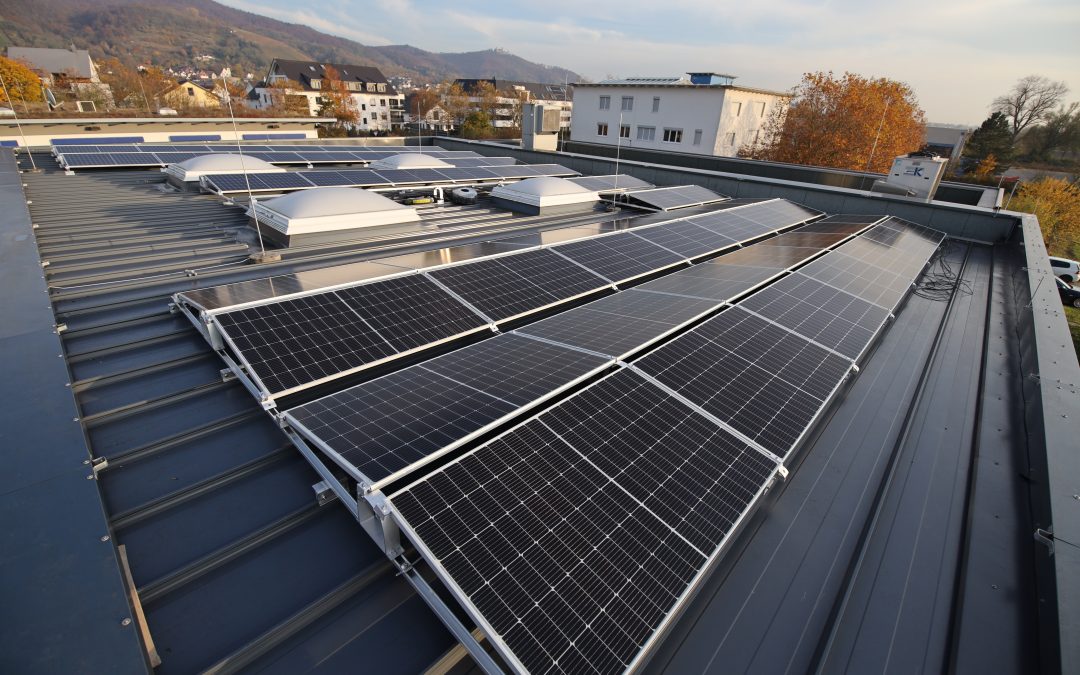 The CuroCon GmbH stands for future-oriented technologies, their expansion and use. For example, hybrid vehicles are used in the company's own fleet. These are charged at the charging stations that we have modified and built ourselves.

The aim of CuroCon GmbH is to cover its own energy requirements with existing resources. But not only a contribution to environmental protection can be made. By using renewable energies such as photovoltaics, electricity costs can be reduced. So it was only a matter of time until CuroCon GmbH could call a photovoltaic system installed on the roof its own. Its modules were already installed at the end of October. So that the plant can be put into operation in the near future, the main distribution box is currently being extended accordingly.

Fig. 2: Preliminary work for the installation of the photovoltaic system in 2021. Source: CuroCon GmbH.

For the installation of the photovoltaic system, approx. 280 sqm are available on the company's own flat roof. This area was equipped with 80x 370Wp (29.6kWp) modules.

Load management is designed to meet three objectives: The first is to maximize self-consumption, the proportion of electricity produced by the solar system that has not been fed into the public grid. Likewise, the goal is to maximize self-sufficiency, the proportion of the total electricity consumed that was self-generated. To achieve this, the simplest solution would be to keep the charging power exactly equal to the generator power throughout the day. The second goal is to have all electric cars fully charged at departure for maximum range. The simplest solution would be to increase the charging power to its maximum when an EV arrives, thus achieving the fastest possible end of charging. The third objective is to limit the maximum power drawn from the public grid.

The financial photovoltaic plan with the fastest possible payback was as follows:

The technical implementation was also planned. As a basis, an energy forecast was created for the photovoltaic system and the charging infrastructure. The specification was to use the software independently and as an extension for the in-house automation system CuroControl® to be used.

For economic load distribution, a control system is used that compares the current consumption with the available power in real time and allocates it automatically. For this purpose, the already existing control system of the charging park has been expanded and adapted and is in the ongoing process of further development and evaluation.

The distribution of energy is planned and allocated according to the largest assumed consumer in the weekly schedule.

In the future, a rotary storage system from the company "ADAPTIVE Balancing Power" in the form of a mass flywheel will be integrated next to the PV system to increase self-sufficiency or to support the DC charging points.