No luck at the Formula Student in Hockenheim 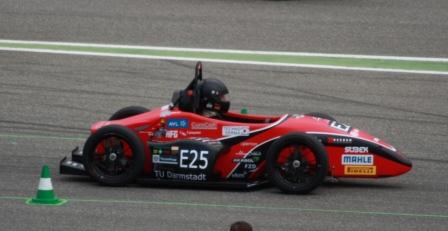 The Formula Student Germany took place this year from 31.07. to 05.08. at the Hockenheimring. The expectations of the DART Racing Team for itself were high, but unfortunately were not quite crowned with success due to technical KO.

CuroCon as official premium partner did not miss the eta2012 race of course and drove with a large team to Hockenheim on Sunday, August 5, to support the DART Racing Team.

Already the day before, the DART Racing Team could convince itself of the result of its hard work at various competitions. The high performance of the engine could inspire, but unfortunately it was not in accordance with the rules and led to a slight deduction of points. Nevertheless, the team was overall very satisfied with the results of the first days and started full of optimism into the last race - the Endurance - on Sunday.

When the CuroCon arrived at the race track, a great atmosphere awaited them. The "FSC Endurance", where the combustion race cars compete against each other, was in its final stages and was just entering the final spurt. Afterwards, the race of the electric vehicles, the "FSE Endurance", took place.

In the Endurance race, the teams drive through a course similar to autocross. The main aim is to demonstrate the durability and reliability of their vehicles. The aim is to complete the 22 km course in a good time with as few mistakes as possible. After 11 km there is a driver change.

The DART Racing Team started with its race car as the third of a total of 32 participating teams. While the design of the eta2012 was quickly convincing, its technology did not stand up to the heavy stresses this time. Already in the first lap, the right drive shaft popped out, making a fast drive impossible. Thus, the TU Darmstadt team was unfortunately eliminated. However, only 11 of the participating teams managed to successfully complete the Endurance. Der erste Platz hierbei ging an das Team der ETH Zürich.

At Formula Student Germany, however, the teams compete in seven other disciplines. In the end, the team with the best overall package of design, racing performance, cost planning and fuel consumption wins.

This year, 110 teams from 25 nations from 5 continents took part in the international design competition. With over 3000 participating students and more than 7500 spectators, this year's Formula Student Germany is the largest competition in this category ever held at the Hockenheimring.

This year, the TU Delft emerged as the winner of the electric racing car competition, closely followed by the ETH Zurich and the University of Stuttgart. Unfortunately, the DART Racing Team returned to Darmstadt without the longed-for trophy due to the technical problems encountered. Despite all this, the team's motivation even increased as the eta2012 showed that it can be absolutely competitive.

For the next upcoming event, the Baltic Open in Darmstadt from August 23 to 28, 2012, the DART Racing Team will certainly prepare its race car optimally this time.

And we at CuroCon will keep our fingers crossed for the team to have better luck and success in their hometown this time. 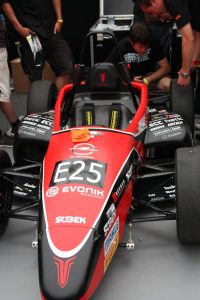